The Queen’s Beasts Collection from the Royal Mint, part I

'In the first of a two-part series, we look at the six original “King’s Beasts” of the 10 heraldic statues representing the genealogy of Queen Elizabeth II. In part two, we focus on the remaining four, which were added for the Queen’s coronation in 1953.'

In 2017 the Royal Mint issued its first coin in the 10-coin The Queen’s Beasts Collection, a celebration of the heraldic beasts that represent the ancestry of Elizabeth II. Here we look at the original six, based on Henry VIII’s ‘King’s Beasts’; in part two we focus on the remaining four beasts  added for the Queen’s coronation in 1953.

The origins of the collection

The King’s Beasts originate at Hampton Court (its Great Gatehouse, flanked with 10 statues representing the King’s Beasts, illustrated above), a palace in southwest London constructed by the influential Tudor statesman Cardinal Wolsey (1473-1530). Prior to Wolsey’s fall from grace in 1529 he gifted the palace to Henry VIII (1491-1547), who soon embarked on a programme of embellishment and expansion. After his marriage in 1536 to Jane Seymour (1508-37) Henry commissioned a set of 10 magnificent statues to adorn the bridge leading over the palace moat. Each statue depicted a heraldic creature bearing a shield illustrating the royal and noble genealogy of the King and his new wife.

At Elizabeth II’s coronation in 1953, six of these beasts were repurposed as guards of honour at Westminster Abbey, affirming her lineage to Henry VIII and representing a continuity between the House of Windsor to those of Tudor England. The Royal Mint’s collection is therefore a wonderful amalgamation of old and new amplified by an extraordinary series of limited edition gold proof coins. 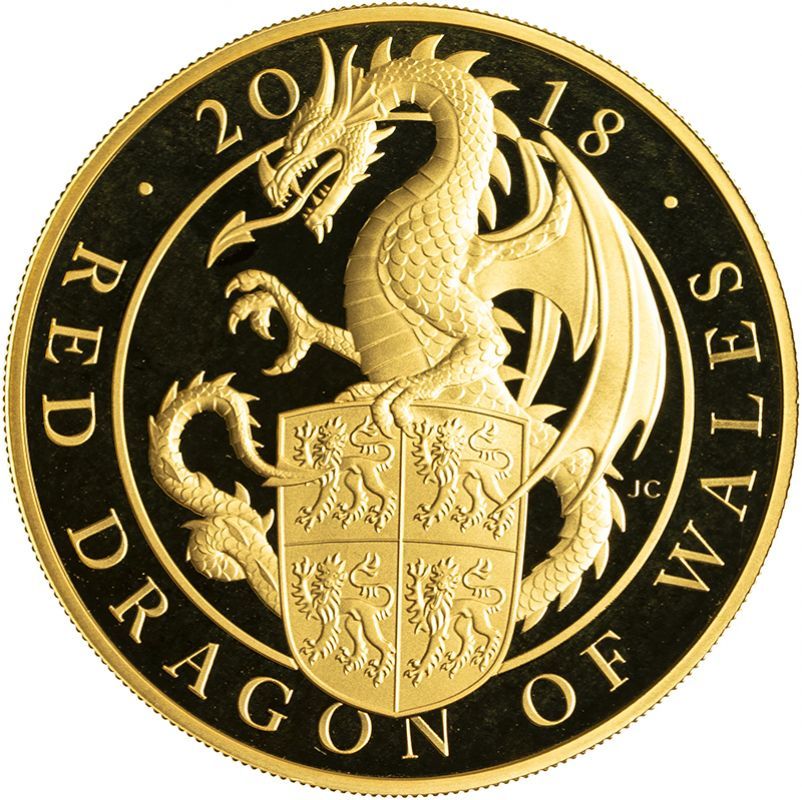 The Red Dragon of Wales

The red dragon graces the Welsh flag and has long been associated with Wales and its earliest kings. It was the emblem of the House of Tudor, and when Henry Tudor (1457-1509) became king of England in 1485 as Henry VII, the red dragon adorned his personal banners. This fearsome and legendary beast therefore symbolises the Queen’s Welsh and Tudor ancestry. Jody Clark’s evocative design shows the dragon holding the shield of Llywelyn ap Gruffudd (circa 1223-82), a great warrior and the last native Prince of Wales. 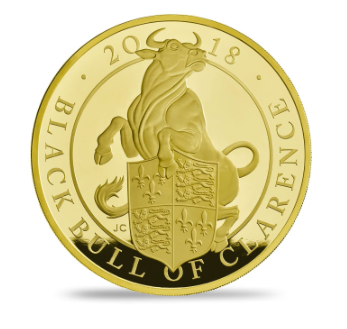 The Black Bull of Clarence

The black bull was used as a symbol by Edward IV (1442-83) and his brother Richard III (1452-85), the last Plantagenet King of England and the last from the House of Lancaster. This beast ties the Queen’s ancestry to the Wars of the Roses and the family feud which shaped 15th-century England. The bull bears a shield depicting the lions of England and the fleur-de-lys of France. English monarchs claimed the throne of France from the Hundred Years’ War up until the early 19th century and the inclusion of the fleur-de-lys signifies this claim. 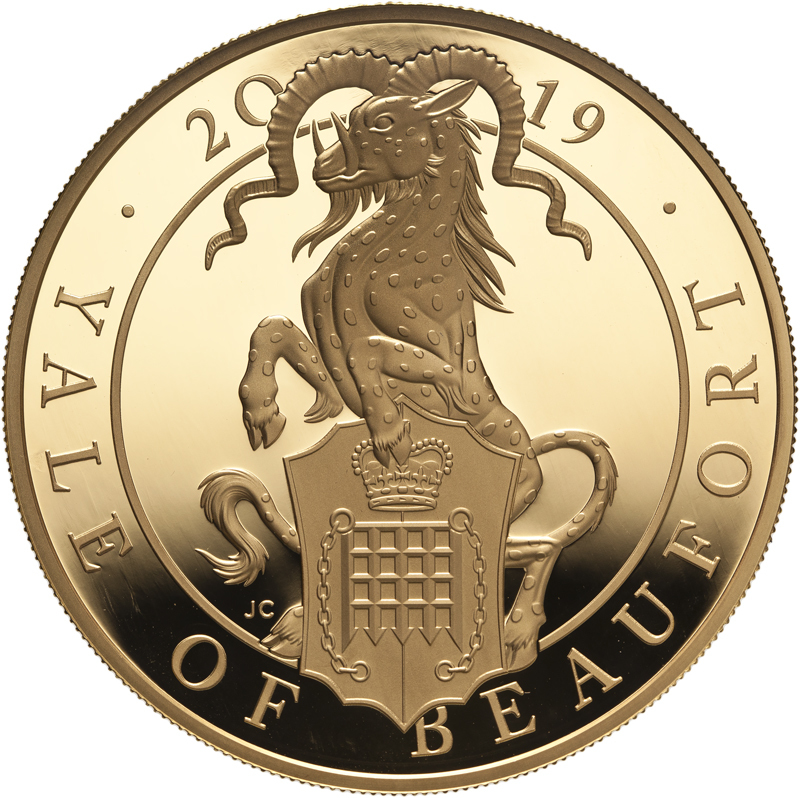 The Yale of Beaufort

The yale is a lesser-known mythical beast, often depicted similarly to a horned goat. Henry VII’s mother, Margaret Beaufort (1443-1509) adopted this creature as her symbol. The shield it holds bears the portcullis, known today as the arms of Westminster and the Houses of Parliament. 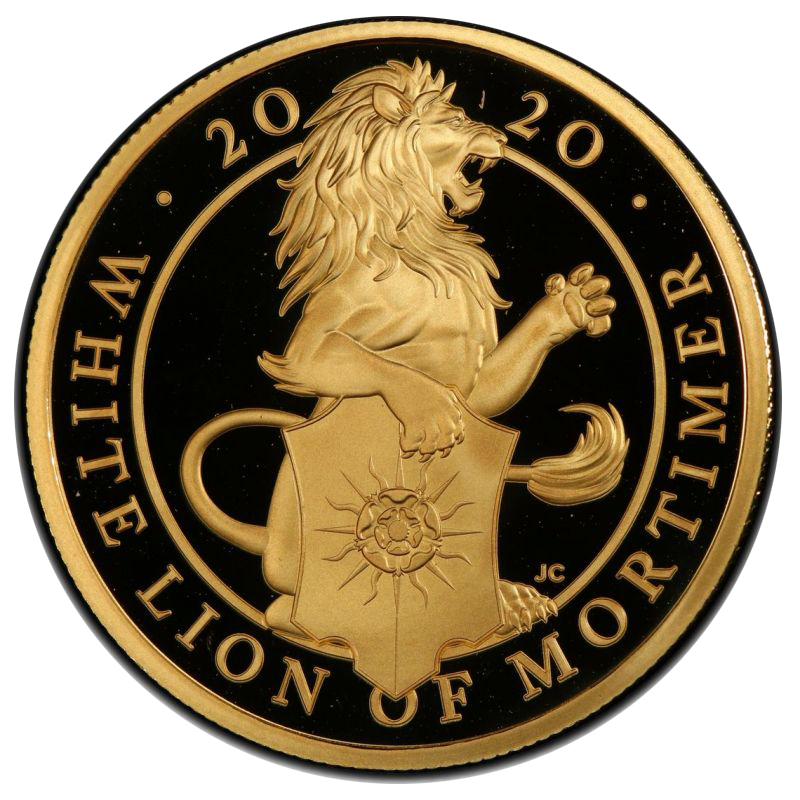 The White Lion of Mortimer

This is yet another symbol derived from Edward IV, the first king from the House of York. Unlike the Lion of England, the White Lion of Mortimer does not wear a crown. Its shield shows the sun circling a white rose, the symbol of the House of York that survives today as a symbol of Yorkshire, and, as part of the Tudor Rose, the floral emblem of England. 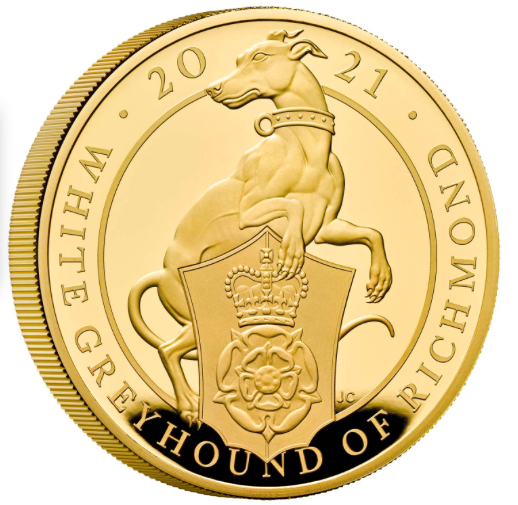 The White Greyhound of Richmond

Though the hound has long been associated with royalty and hunting, the so-called sport of kings. The reason for its inclusion in the Queen’s Beasts is its association with the House of Lancaster and Henry VII. When Henry VII became King of England in 1485 he used the greyhound to affirm his royal lineage and descent from the House of Lancaster. Henry VI (1421-71) had granted this symbol to Henry VII’s father, Edmund Tudor, and it represented agility and athleticism. The greyhound holds a shield bearing a crowned Tudor rose, made up of the red and white roses of the houses of York and Lancaster that represented the union of the two dynasties.

Read part II of The Queen’s Beasts in the Journal for an overview of the remaining coins from the series.

Why buy at auction?

“I don't like risk, I like return, and I certainly don’t want to give that away in the transaction,” says The...

The US election result and the gold price

The result of the November 2011 election is momentous. Not just for American politics, but the direction of the US...

The Three Graces from the Royal Mint

In 2021 The Three Graces proof gold and silver coins were released by the Royal Mint, continuing the Great Engravers...