'The first gold sovereigns were minted in 1489, ending with the reign of the Tudors. Before its triumphant return in 1817, it was a captive of history — by the affairs of state, and the state of the monarchy.'

The first sovereigns were minted at an extraordinary time in English history. Following three decades of upheaval, Henry VII’s 1487 victory in the Wars of the Roses coincided with the efflorescence of literature, music and architecture of the English Renaissance. By the time of the original gold sovereign’s demise just over a century later, Shakespeare’s King’s Men were performing Hamlet on the London stage, great art collections and prodigy houses were being assembled across the country, and the realms of England, Ireland and Scotland were unified under the Stuart crown.

As the founder of the Tudor dynasty Henry VII set about consolidating the power of his monarchy and bringing financial stability to England. A new coin worthy of his reign was first minted in 1489 to mark his ascent.

His son and successor Henry VIII’s coinage could be said to follow the route of his private life — a promising start followed by a steady decline until its third and final coinage (1544-47) which was heavily debased (the coins had a reduced quantity of gold). During his reign, no less than eight mints produced sovereigns, which makes an interesting series with some very beautiful designs.

A Henry VIII (1509-47) sovereign, third coinage, type II, with a lower gold content, showing the enthroned monarch and crowned quartered shield of arms on the reverse

Following Henry’s reign, his son Edward VI struck gold sovereigns of two types: in fine gold at 30 shillings (15.55g) and in 22 carat reduced weight (11.31g) at 20 shillings, or one pound. The 20 shilling coin is popular for its half-length portrait of Edward holding an orb and sword, similar in style to European coinage of the time.

An Edward VI (1547-53) sovereign of 20 shillings, with half-length portrait facing right and and crowned quartered shield of arms on the reverse

During Queen Mary I’s short reign, coinage was restored to its pre-debasement standards. Gold coins were struck at 23 carats 3 1/2 grains and the sovereign valued at 30 shillings. Elizabeth I’s extraordinary 44-year reign saw sovereigns of ‘fine’ gold of 30 shillings and ‘crown’ gold of 20 shillings used, resulting in a complicated accounting system. 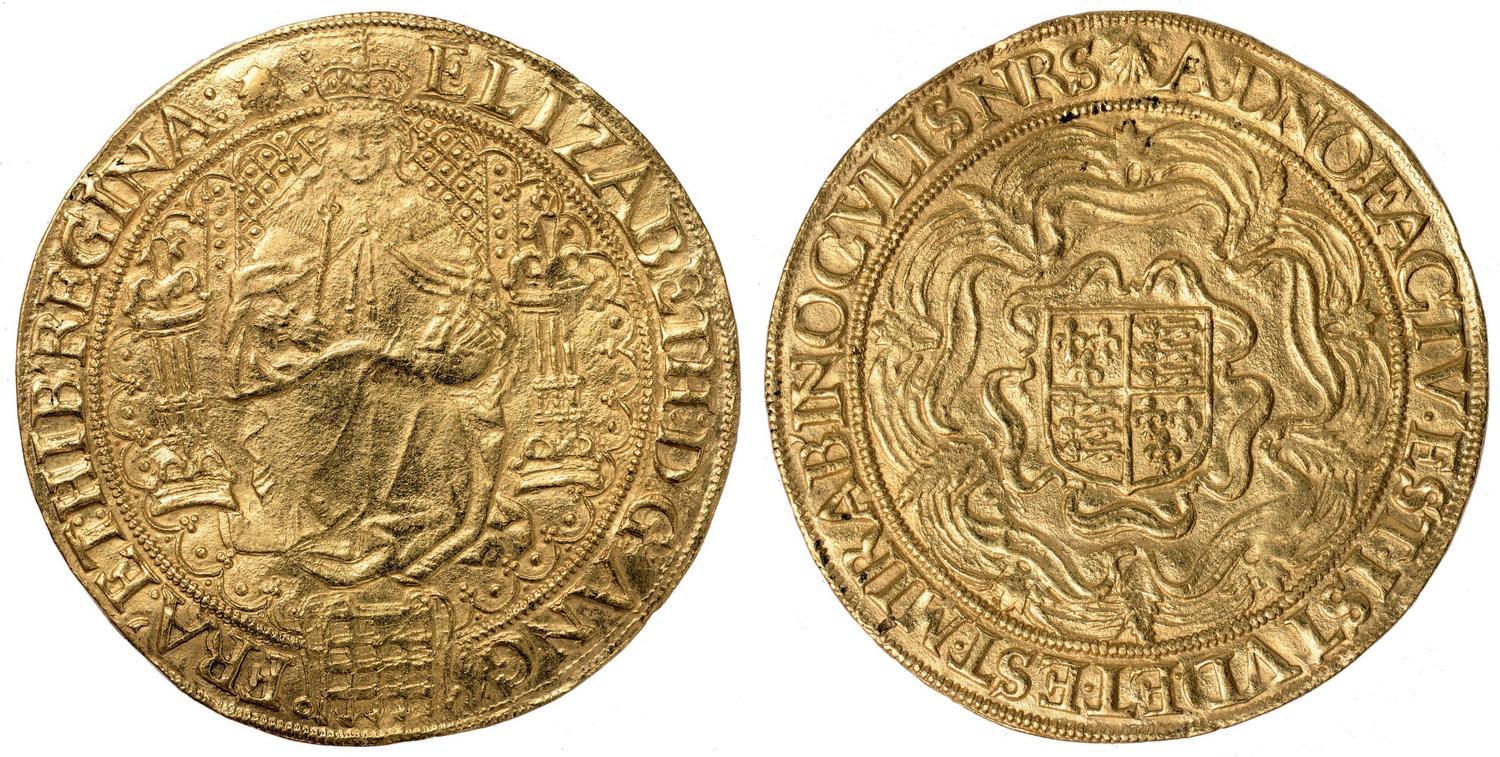 An Elizabeth I (1558-1603) ‘Fine’ sovereign of 30 shillings, 6th issue, showing the enthroned monarch, a Tudor rose set around her coat of arms on the reverse

The demise of the English sovereign

With Elizabeth I’s death in 1603 the Tudor period came to an end, along with the official use of sovereigns. The Stuart monarch James I struck sovereigns of 20 shillings as part of his first coinage, then for his second (after 1604) renamed the coin ‘unite’, as he sought to unify his realms of England and Scotland into Great Britain.

The 30 shillings piece was named ‘rose-ryal’ but this ‘fine’ coinage of 23 carat 3 1/2 grains gradually fell out of use. Towards the end of James’s reign, rose-ryals were struck mainly for ceremonial purposes. 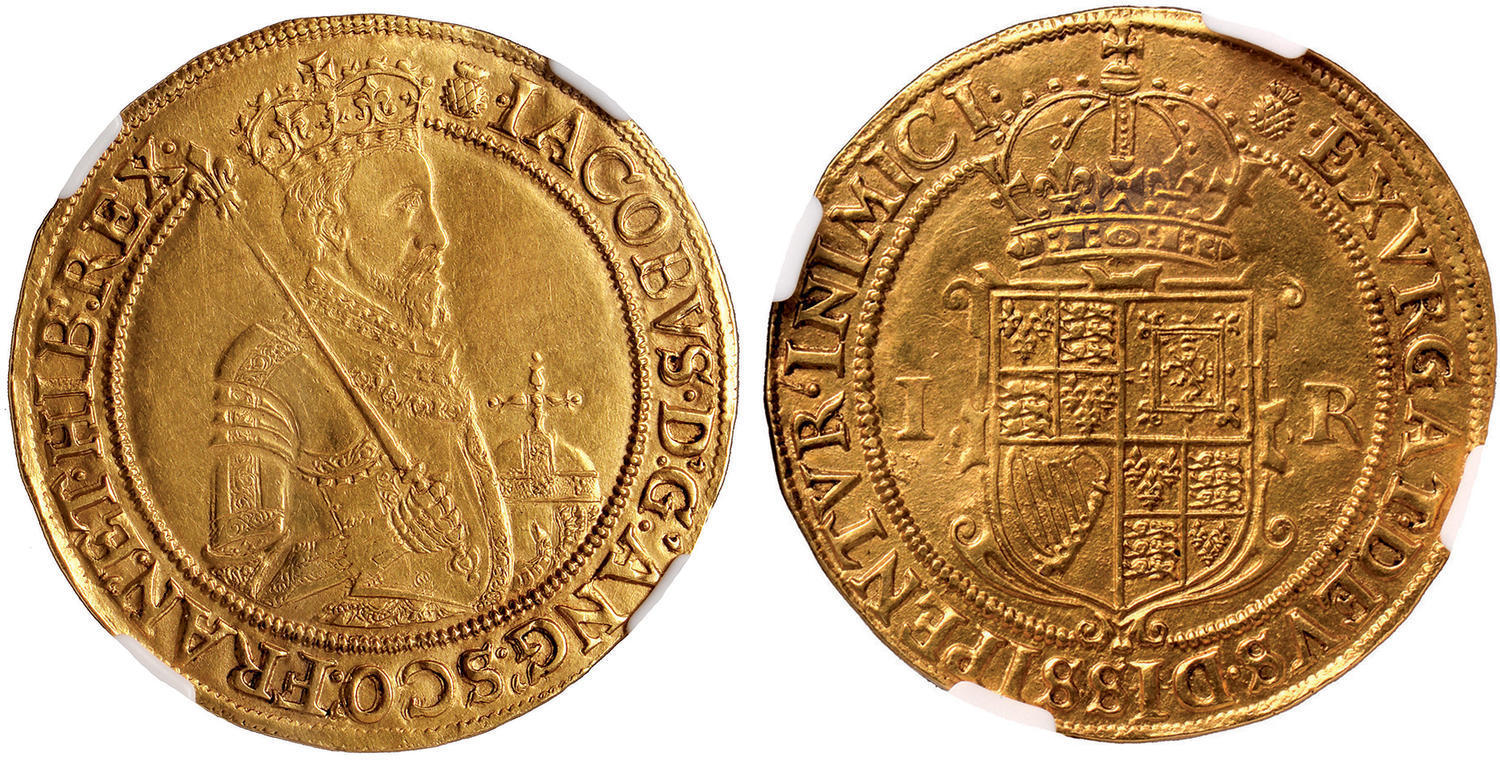 A James I (1603-25) sovereign of 20 Shillings, first issue (1603-04), with half-length portrait facing right and crowned quartered shield of arms on the reverse

Other than an initial reduction of weight to 9.1g for the Unite of 20 shillings, Charles I continued on the minting standards set by his father, James I, and the output of gold coins was stable throughout his reign. During the English Civil War (1642-51) the king continued to produce coin at several Royalist strongholds such as Shrewsbury and Oxford, where impressive ‘triple unites’ of 60 shillings were minted for presentation and political purposes.

The execution of Charles I in 1649, the establishment of the Commonwealth of England (1649-60) and later the Protectorate (1653-59) brought immense political change to the country. However, the coinage stayed much the same, with the unite continuing to be be struck as a 20 shilling piece. 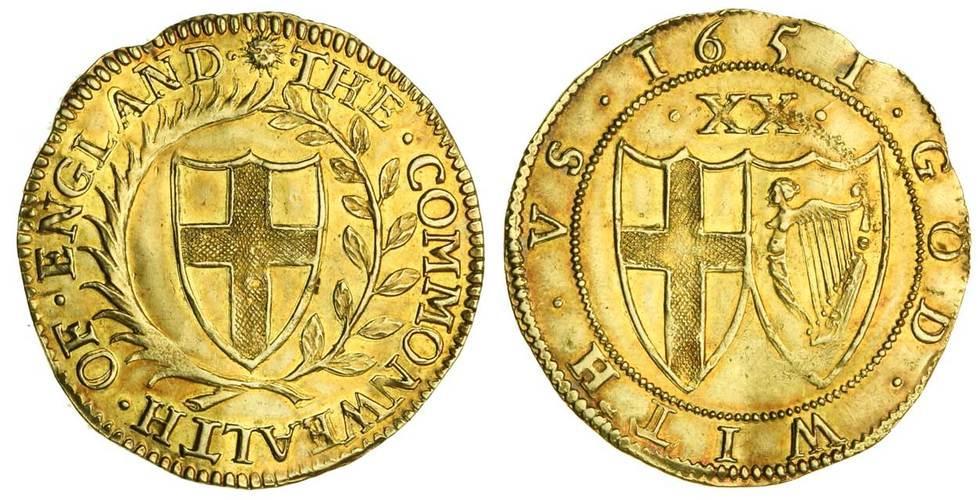 A 1651 Commonwealth of England (1649-60) unite of 20 Shillings, with English shield within laurel and palm branch and conjoined English and Irish shields on the reverse

Oliver Cromwell, Lord Protector of the Commonwealth of England, Scotland and Ireland from 1653 to 1658, introduced the ‘broad’ of 20 shillings in 1656, along with an impressive 50 shilling piece. At this time minting presses, introduced by the Frenchman Pierre Blondeau, finally replaced the outdated hammer process still used in English coin production.

A 1656 Oliver Cromwell (1656-58) broad of 20 shillings, laureate head left and crowned quartered shield of arms of the Protectorate on the reverse

Following the Restoration in 1660, Charles II issued unites during the first two years of his reign. This was followed by the introduction of the guinea, valued at 20 shillings, as part of a renewal of the monetary system. The guinea was to be used continuously until the Coinage Act of 1816, when it was replaced by the pound as the major unit of currency, and in coinage by the sovereign under George III. Since then, the sovereign has remained the flagship gold coin produced by the Royal Mint, one that has survived retirement, rebirth and reform to become a modern classic.

The Three Graces from the Royal Mint

In 2021 The Three Graces proof gold and silver coins were released by the Royal Mint, continuing the Great Engravers...

2021 Britannia with Lion and Premium Exclusive range of gold and silver proof coins from the Royal Mint celebrates two...