The Queen’s Beasts Collection from the Royal Mint, part II

'In preparation for Queen Elizabeth II’s coronation in 1953, four new statues were added to the six “King’s Beasts” to create the “Queen’s Beasts”. The 10 beasts stood guard outside Westminster Abbey as she was enthroned.'

In 2017 the Royal Mint issued its first coin in the 10-coin collection, The Queen’s Beasts, a celebration of the heraldic bestiary that represents Elizabeth II’s ancestry. We previously focused on the original six based on Henry VIII’s ‘King’s Beasts’ (they flank the the Great Gatehouse at Hampton Court palace, illustrated above); here we look at the remaining four, added for the current monarch.

In preparation for the crowning of Queen Elizabeth II in 1953, four new statues were created to replace four of Henry VIII’s original beasts not related to the current her lineage. These became the ‘Queen’s Beasts’: the Unicorn of Scotland, the Falcon of the Plantagenets, the White Horse of Hanover and the Griffin of Edward III. Brought together, the 10 beasts stood outside Westminster Abbey as a heraldic guard of honour during the Queen’s coronation.

Beginning with the Lion of England in 2017, The Queen’s Beasts Collection was completed in in 2021 with a special ‘completer’ coin reuniting all 10 beasts in one design. The completer range was led by an extraordinary 100mm-diameter kilo gold proof coin in a limited edition of 16 with a denomination of £1,000. The design for the range by Jody Clark  depicts the beasts united in a protective circle around the Queen, making it the only coin to feature the beasts and the monarch they represent in one regal design. Below we looks at some of the individual coins making up the collection that led up to this iconic coin. 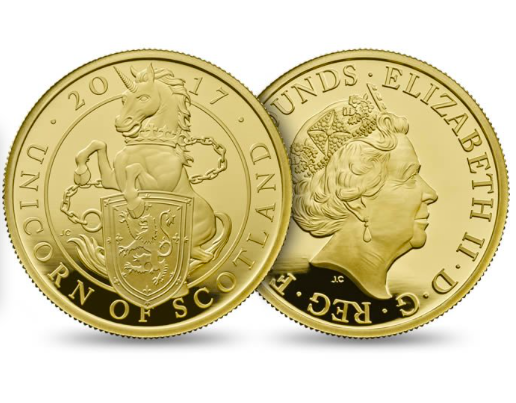 The Unicorn of Scotland

The second coin in the series, the unicorn of Scotland features on the modern royal coat of arms. This mythical creature with its white coat has long represented purity and James I (1566-1625) added it to the Royal Arms when he became the monarch of both England and Scotland in 1603. Today it represents the Queen’s descent from the monarchs of Scotland, the golden chains indicating its strength — a fierce animal that must be tamed. Jody Clark’s design shows the unicorn rearing its hooves and holding a shield depicting the Royal Arms of Scotland, a lion rampant. 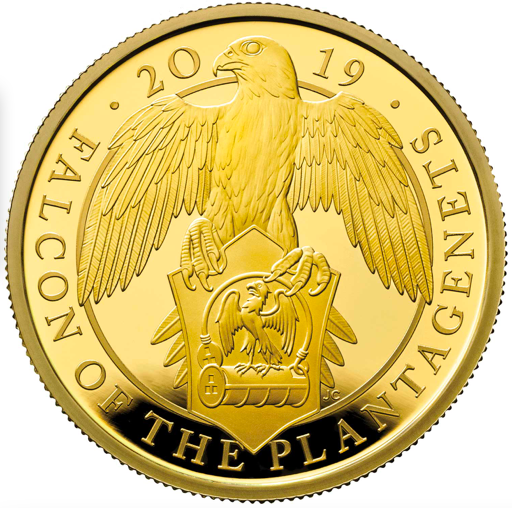 The Falcon of the Plantagenets

The falcon is a symbol that connects Queen Elizabeth II to the House of Plantagenet, specifically to the great warrior King Edward III (1312-77). Edward chose this symbol to demonstrate his love of falconry and hunting and from then on it was popular as a royal symbol. The shield clutched in the talons of Jody Clark’s proud falcon depicts another falcon in a fetterlock, the badge of Edward IV (1442-83). The falcon was chosen in 1953 as one of the new Queen’s Beasts and it is no wonder given its pedigree as an ancient royal symbol. 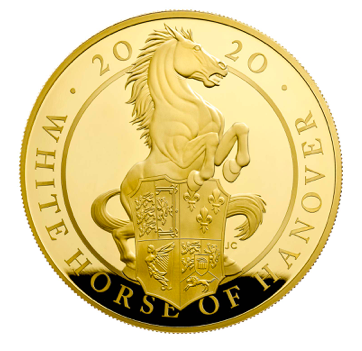 The White Horse of Hanover

Another ‘new’ beast created in 1953, the White Horse reflects Elizabeth II’s descent from George I (1660-1727) and the House of Hanover. In 1714 the British throne passed from Queen Anne (1665-1714) to the maternal great-grandson of Charles I (1600-49). The white horse was a symbol of the Guelph dynasty from which the House of Hanover descended and became a part of British heraldry when George I assumed the throne. The horse holds the arms of George which include the lions of England and lion of Scotland, the harp of Ireland, and the arms of Hanover. These arms were used by all the Hanoverian Kings until the accession of Queen Victoria, when the Kingdom of Hanover passed to another branch and the current Royal Arms were adopted. 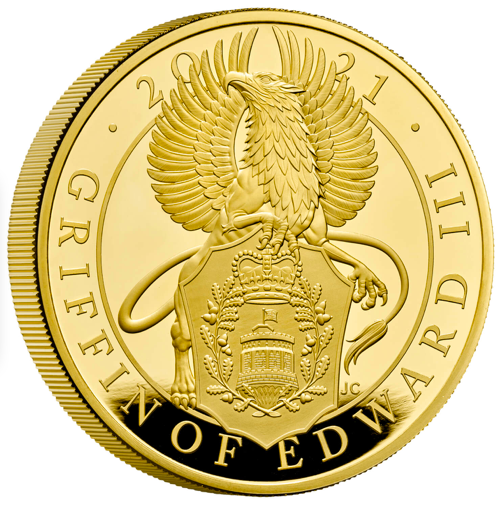 The Griffin of Edward III

Thought to represent strength and courage, the mythical griffin was used in the personal seal of Edward III (1312-77). In its arms it holds a shield showing the round tower of Windsor Castle enwreathed and crowned. Edward was born at Windsor and strongly associated with the castle. This beast is particularly relevant as Windsor is the monarch’s favourite home and gives its name to the current royal house. The shield carried by the griffin is the badge of the House of Windsor and thereby the heraldic symbol of the modern royal family.

Read part I of The Queen’s Beasts in the Journal for an overview of the remaining coins from the series.

'The gold sovereign is the only coin in history to be minted in five continents across the British Commonwealth. We...

The QUEEN Collection from the Royal Mint

The first release from the Royal Mint’s Music Legends Series, the QUEEN Collection features the iconic band who...

The first gold sovereigns were minted in 1489, ending with the reign of the Tudors. Before its triumphant return in...